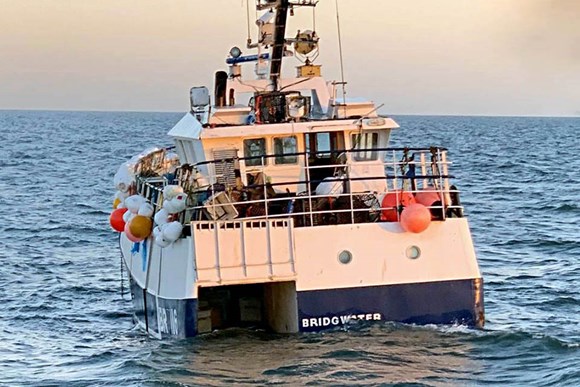 Report on the investigation of subsea explosion, resulting in crew injuries and damage to the crab potting vessel Galwad-Y-Mor (BRD 116), 22 nautical miles north of Cromer, Norfolk, on the 15 December 2020

At 11.22 on 15 December 2020, the 15m crab potting vessel Galwad-Y-Mor was hauling pots in the North Sea approximately 22 miles north-east of Cromer. The crabbing gear disturbed a 250kg unexploded WWII bomb, which detonated on the seabed below the vessel.

The ensuing explosion caused a shock wave that threw Galwad-Y-Mor about, resulting in significant injuries to five of the seven crew and major damage to the vessel’s hull and machinery. Despite their injuries, Galwad-Y-Mor’s crew were able to send a distress message, launch the liferaft, and board rescue boats that had been dispatched by a nearby offshore support vessel. The injured crew were transferred to hospital by helicopter and RNLI lifeboat. They were treated for head, back and knee injuries. Galwad Y Mor was successfully salvaged and has been rebuilt.

The key safety issues identified were: